Here is the truth.

So, in about a week and a half, I'm officially aging up into F35-39.  Which I guess I already was on January 1, but whatever.

On a side note, I got carded the other day which only happens when I am straight-up NASTY.  I mean, sweaty for 5 hours, helmet head, mix of chlorine or Lake Erie + B.O. running-clothes nasty.  Henceforth, I shall consider my anti-aging regimen to be as NASTY AS POSSIBLE.

Anyway.  So I've been thinking about this for a while, but I'm not sure how to get it down.  I'm just going to give it a shot.

There is a fine line between being making excuses and being realistic.  And I really, really try to be realistic.  And not make excuses.  Because let's be honest here:  I have a few strikes against me for being a competitive triathlete.  As I'm sure many of you out there, do, too.

I work full time.  Strike one.

My job requires quite a bit of time outside of work to be dedicated to work.  Strike two.

I have a four year old and a two year old.  Strike three.

I feel like I hear many people say, "OUT" with that combination.  Because that is what your body wants.  Honestly.  Your body wants a time-out.  Your body, with those three things, wants to sit on the freaking bench for an inning already.

Many, many people told me that I'd be out with this combination.

But I don't want to be.  I still want to start.  Maybe I can't bat cleanup anymore.  Or wait, maybe I can? Maybe by saying I can't, I'm creating a self-fulfulling prophecy that everyone warned me about in the first place. Right?

The bottom line is this:  I'm learning what is realistic for me right now and what right now is not possible.

Right now.  Not saying impossible, but not possible right now.

I learned this in my BQ attempt.  I learned that I cannot, in fact, have it all in May.  And my body has done a damn good job showing me that this season.

I can't turn that off.

So now, what am I most concerned about aging up?  Is it the wrinkles I will inevitably get someday?  Is it the grey hairs?

No. I don't give a rat's you-know-what about that.

It's that, holy crap, these chicks are fast.  And I don't know if I can keep up.

Here is the truth.  Ready?

I'm not training as much as you.  Or probably anyone.

Is it really realistic for me to go out and try to be competitive?  With people who don't have all three strikes against them, or are just flat-out better at dealing with being down-in-the-count than I am?

(Sorry for all the baseball references.  4 years varsity fastpitch softball here.  I used to be kind of a big deal--not really, that's definitely a joke)

But I have to try.  I can't NOT go out there and try to beat myself.  Or, occasionally, the chicks that have a F35-39 on their leg.  Even if they train way more than I do.  Even if they weren't up all night with a fever-stricken toddler.

That's not an excuse.

That is reality, though.  It is what it is, and it's not changing anytime soon, and I want every single part of it.

I've been given this amazing opportunity to train with the best equipment out there, and I try every day to work as hard as I can to live up to it.  Sometimes I just don't have time. I really don't.  So I work out for 30 minutes or 1 hour while I feel like every. single. triathlete. on earth is working out 2-3 hours more.  And then I feel like I just can't hang.

I'm getting dropped in training.

But I know that if I can just be honest here--and in general--maybe I can somehow help someone else out.  I'm not going to pretend that all I do is train.  Folks, I am so far from those days it ain't even funny.  And I know that comparing myself to those that can is just not fair.  To myself.  I still can pull off some pretty amazing stuff.
I've been working with a pretty awesome group of women, helping them get ready for the Huntington Sprint Triathlon in July.  All of them are mommies with young kids.  Some stay at home, some work outside the home, some have husbands that travel often.  All of us have strikes against us somehow, and most of us have been told in some way or another that "now's not the time" or "you can do that when they get older" or some other thing that sounds to me an awful lot like an excuse.

But I love pursuing my own little version of paradise, which involves juice boxes and DBQs and tee ball and the pursuit of a 7-minute mile. 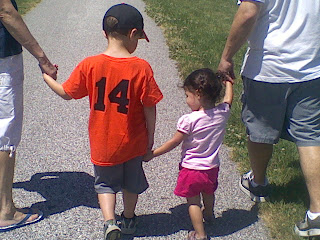 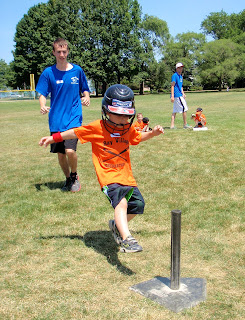 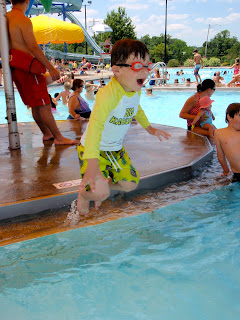 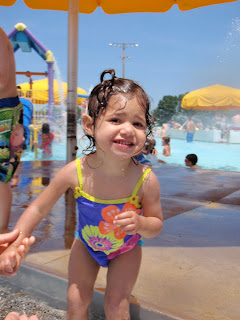 I'm going to keep trying to chase that, even if I trip and skin my knee and watch everyone else run farther than me, like my little Bean does pretty much every day.  Because she doesn't care.  She frowns, gets up, maybe whimpers, and then says, "Wait for meeeeeee!"

Posted by Trisaratops at 8:56 PM

Miles of the Journey said...

I am teaching my grandchildren to balance. Good balance can be hard work and a little scary sometimes. Even us adults, have to have good balance with life for it to be as rich as it can be. Even at 68, I still am not crazy about getting passed in a race. And it seems it is this spirit that keeps me young practising balance, to be the best, to reach the highest, that I am really capable of.

Only this year am I coming to terms with not being competitive. I was never all that fast, and now with the kids, I am so strapped for time, I find it hard to give it my all.

The reason you get carded when you're that NASTY is because a REAL ADULT would shower and clean-up before trying to get booze...only underagers are that desperate ;o) - kidding!

Keep at it TST! As long as YOU are happy, that's what matters.

Some advice from a mom of a grown daughter. Stick to sprints and 5ks for now. (maybe throw in an oly or 10K for good measure). I worked full time too until just a few years ago when I said "enough" with public school garbage, and retired (working part time). Now I have time for longer stuff. You will too. You are doing the most important jobs in the world. Raising your kids right and looking after other people's children. Be proud!

Hi Sara, I enjoy your blog so much. You have a full life with your family, your sport and your work. You could train like a pro, and be competitive, but the rest of your life would take a hit. Of course you know that. Be proud of what you are doing, and compare where you are with your contemporaries (Janet E excluded :().