Wake Me Up When November Ends

I am a little nervous. It's been a nice month and a half of recovery, but I have felt listless. Shouldn't I be following some plan? I get so lost without a plan. Hurry up--someone, tell me how far to run today, what my cadence should be, and how many laps I need.

Back feels better now...still a little sore but getting there. I have a good plan in place. Now I just need to do it.

The first day of a plan always seems the hardest. It's like when I sit down to grade 129 test essays. Ugh. I dread it all day. Or when I have to run 4X800 repeats at a negative split. That's enough to have me dreading the track all day, too. But then I do the first 800. Grade the first test. Realize it's not as bad as I made it out to be in my mind. Start to wonder why I spent all day worrying about climbing a mountain I mentally created.

Will it be the same way here?

Regardless, I'm TOTALLY tricking myself tonight and NOT showering at night, after Tuesday's episode.... 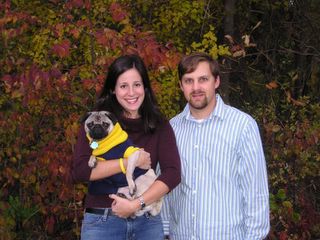 me and the boys

Posted by Trisaratops at 9:11 PM No comments:

Ommmmm.....just went to my 3rd yoga class ever and I think I'm hooked. It's great for inflexible people like me and seems to be doing a lot to strengthen my core. I hope I can fit it in when the heavy IM training starts--it seems like a nice complement to all the pounding on the pavement and stuff!
Posted by Trisaratops at 8:46 PM No comments:

I'm not a morning person. I need to start being one NOW.

I was supposed to get up today at 5:30 and head to the pool. It didn't happen. I hit the alarm and slept another hour. That felt good, but now I feel bad.

I know it was probably good for me...after this stressful weekend with Matt in the ER twice, and my back has been troubling me for 2 weeks...I know I probably needed it. I never give myself time off. Not since last January when I started training for the Cincy Marathon.

But I still feel rotten.

I think I'm going to need to play tricks on myself to get out of bed. For instance, last night in the shower (since I like to take my showers at night to sleep to the last possible moment), I thought, "You know, if I was smart, I'd NOT shower tonight so I HAVE to shower in the morning--and then I might as well get up and swim if I need to shower anyway." But I kept on showering.

And then I slept in.

I know it's just base month here before the REAL fun begins. What's making me nervous? The time commitment? The task looming over me until September 10th is over? The fear of failure? Maybe a little of each.

I just need to realize that I CAN do this but not in my bed at 6am. In the words of the great Gen-X film Reality Bites, I can't "turn my room into a den of slack."

Okay, onto the tri....trained for 5 months for this baby so I was pretty nervous and excited. The weather report looked good Saturday night so
Sunday morning I got up and headed out for the 50 minute drive to the race site. Well, it became pretty clear to me that FOG was a problem. I could barely see the roads! I thought, "Now how the heck am I going to bike in this??" Consequently, as I got there, the race directors decided to push the start time back 15 minutes. That wasn't so bad, but 15 minutes became an hour....and then I thought, "Hmmm....this is going to be a hot run." I hate running in the heat. I tried not to think about it...
Saw Kara and Brady at the start along with Liz, Mark, and his 2 dogs. That was fun! Kinda got rid of some jitters. Found my buddies Lauren and Rob from the Tri Club, too, so at least we had someone to kill time with. We all said a pre-race prayer and then headed down to the beach. The race was extremely well-organized--I was very impressed.
The fog finally started to lift over the lake and lo and behold, it was
really pretty! But, they decided to change the course to Plan B. We would follow the shore and make a big rectangle, and wouldn't have to exit the water to make a turn around a trash can like we were going to before. (wierd!) It was an open water start and my first one like that. As we watched the waves ahead of us I tried to remember I've trained hard and will be OK....the water was very smooth, which I'm not used to with Lake Erie, so that was good news! Then the start was underway and time to go.
My first lap felt great...I felt like I was just coasting along. Gotta love that wetsuit. :) I resisted the urge to check my 1st lap split on my watch just in case it wasn't as good as it felt. Kept on to the second lap and then it was time to exit the water. I stood up and looked at my watch and about had a heart attack: 30:02 when I got out of the water. Now, I felt good, but there's NO WAY humanly possible that I swam 1.2 miles in 30:02. It MUST have been a little short. I was hoping for 37-42. So I'd like to think I was just that fast but who am I kidding!!!! :) OH well, better a short swim than a long one...hee hee
On to T-1...my parents and husband were there, along with Kim, Jeff, and my in-laws Rick and Linda. You guys have NO IDEA how much it meant for me to have you all there! It REALLY helps when the pain sets in! :) I looked at my parents and said, "Now the hard part!" as I headed for the bike.
No wind and a sunny day---couldn't have asked for better conditions.
(Unless of course you ask my back, which may tell you it COULDA DONE
WITHOUT THE SUN--I got FRIED despite wearing sunscreen) First lap I cruised around at a good pace. It was very flat except for a few small hills but nothing too bad. That's good for me since I'm a hill slug. Did the bottle exchange and the volunteers were great. I was cruising at a fast pace for me and felt great! Then the 2nd lap hit and my legs started to get tired. I had to slow down quite a bit. I was sort of regretting doing the first lap faster. Oops. Live and learn I guess....after about 2:30 hours I found myself having mental conversations with my bike. It went something like this:

Me: Bike, I hate you.
Bike: You're slow.
Me: Bike, why are you doing this to me?
Bike: Hurry up, slowpoke.
I realized I must outwit my bike. At Shannon's advice, I ate as much as I
could stomach on the bike. I'm a HUGE fan of these Clif Shot Blocks...gummy bear consistency carbohydrate thingies. Those and all the
electrolyte pills I chugged seemed to help. Got off the bike somewhere
around 3:22?....that was close to my goal so I was OK with it, although I
was pretty tired.
Now back to transition for the run. This was the part I initially wasn't
worried about before race day, but then it was about 2pm, 80 degrees, and not a cloud in the sky. Time to worry. I realized I wouldn't make my
initial time goal of 2:10-2:20 and just decided to do whatever it took to
KEEP MOVING. My first and last miles were around 9:30. Everything in
between was a blur of pain and hammer gels. :) I saw tons of people
walking but I really tried to just focus in my head of one foot in front of
the other. I kept shuffling along and at this point I could only stomach
e-caps and gels. The run was 2 loops, and the first loop went OK, but then I had to run past the finish line and KEEP GOING. Yeah, that was tough. The second lap was purely mind over matter. I walked through each water stop and then ran (if you can call it that) to the next one. Had a good kick at the end--not sure where that came from but I think it's because my dad told me the Indians were winning and the Yankees losing combined with the knowledge that Graeter's Ice Cream would be in my possession soon and I could finally sleep in on the weekends and during the week a little, too.....went for an all-out dash in the last 100 yards or so (a little help from the guy upstairs with that one) and crossed the finish line in 6:34.24 (by my watch). My half-marathon was somewhere around 2:33....all things considered I wasn't too far off my goal so I was OK with that, too. Total race time, I was shooting for under 7 and around 6:30 so I was really happy! I do think that swim was a little short but hey, I'll take it I guess! :)
So now I know what I need to do (more bricks and hills, especially in HEAT) and what I feel comfortable at (swim and hydration/eating). This was a great test of my spirit and what I was capable of. I feel like I really did the best I could. I couldn't have done it without the words of encouragement or support I received from you guys either at the race, or during my months of training with some of you! I am so lucky to have such great friends and family to get me through this! THANKS so much for everything you all do.
Sara :)
PS: On to Wisconsin....
Posted by Trisaratops at 8:28 PM No comments: