So I got myself a new cookbook, after I previewed it from the library and decided I wanted to EAT EVERYTHING:


I heard about it through Mama Simmon's blog.  And since she pretty much is awesome, I knew I had to check it out.

I really like the philosophy of the authors.  Food should be real, food should be simple, and food shouldn't take all day to make.  I can definitely get behind that.

So my New Year's Resolution (see, I treat the first day of summer vacation as my real "new year"), I decided I'd try to break out a few of these recipes every week and see how they go.  My big goal is to stock my freezer in August so that I've got lots of healthy stuff tucked away for when I don't have time to sleep function think cook during the school year.

Up this week?  Two recipes, and they get my wholehearted THUMBS UP!
First, I did the Meatball Sliders.  I used organic chicken sausage and whaddya know, turkey was on special this week, so I grabbed me a pound of that.  Mixed it up as they told me to, but instead of golden raisins, I had craisins.  I wasn't sure how that would work out, but it turned out that it was DELICIOUS.  Who knew?!
We put them on whole wheat slider rolls with some tomato sauce.  I also mixed up some cilantro-mint yogurt (p. 291) in my BRAND spankin' new factory-refurbished Vitamix (treated myself since I sold my road bike!) and Matt and I topped ours with that.  The kids had them with some sauce and a bit of shredded mozzerella.  The recipe made more than they called for, and I ended up with 21.  I botched one, so Mugsy the Wonder Pug got a very special treat for dinner.  We all feasted like kings, and I still have 12 balls left!

So this is definitely a keeper recipe as well as one that will freeze nicely!

Tonight, I tried the Buffalo and Sweet Potato Tacos.  Except instead of Buffalo, I used some local, grass-fed beef.  It was on sale, and I thought it would substitute nicely.

Browned the beef, and added the spices which included taco seasoning, some chili powder, and a bit of brown sugar.  Then you add some peas and the juice of a fresh lime.  It seemed like a bizarre combination, but let me tell you the awesomeness of it....it was unexpectedly sweet.  Delicious and perfect for summer!

You also saute up some sweet potatoes, red peppers, and onions.  I added a bit of lemon-rosemary spice that I have from Wildtree which is tasteeeee.  I have to admit I wasn't sure how it would taste or how the kids would do with it, especially since Bug told me that sweet potatoes were "gross."

Well guess what?  That kid OUTATE ME!  Again!  I am in big trouble when he hits high school...
Bug gobbled up an entire taco and then asked for more--and ate all of another one!  Even my picky Bean couldn't get enough of the sweet potatoes, red peppers, and sweet and spicy beef.  Matt and I put the cilantro-mint yogurt on top again and it was delicious!

I think this could also be made frozen, but probably just the meat and peas.  I would just do the veggies before serving since peppers and onions don't seem to ever thaw well for me, but maybe I'm just doing it wrong, cuz Trader Joe's rocks that shizz all the time.  Oh well...

Anyway, if you haven't checked out this book, I highly, highly recommend it.  It's full of easy stuff that kids will like, too.  I'm going to try the sweet potato cakes later this week.  I know Biju Thomas and Allen Lim created this for his Tour athletes that need stuff to eat on the go, and by "go" I mean INSANE HUNDRED MILE RIDES ON MOUNTAINS, but this busy triathlete mama has used them to go, as in go to the local kiddie pool and avoid the snack bar at all costs. 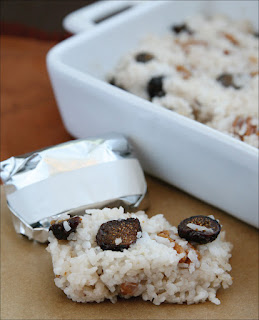 And guess what I'm gonna try with all my leftover juicing veggies and fruits?  These tasteeeeee little burgers: 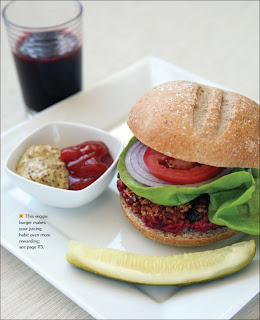 So if you're a triathlete, and you like to eat (I mean, isn't that the best part about doing these crazy workouts?!), but don't have a gazillion hours to spend buying copious amounts of strange ingredients and cooking, then you DEFINITELY should be checking this out.

Posted by Trisaratops at 8:32 PM

Eating more is definitely the best part of heavy tri training. That looks fantastic! I've been meaning to check out that book too.

I won this book from Steve in a Speedo last fall. It is the BEST. We modified the date-almond-rice bars into a faux-Larabar (basically, by adding a ton of dried cherries) that my kids ADORE.

Awesome gluten free options too! Highly recommended. Might have to try those tacos!

I just of this book! I hear good things of meatball sliders!!