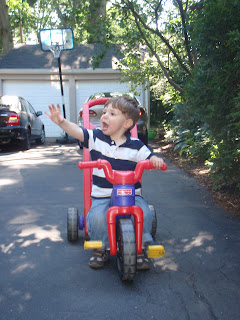 Waving to all his fans on the Tour de France...
So much to do, so little time to blog!

Lovin' this summer thing, yo.

Had my 10 Year College Reunion at Miami last weekend. Seriously...how did that happen? We had a blast and generally acted like idiots for 48 hours...which is pretty much how we acted from the ages of 18-22. Or arguably, still act. Which was super awesome. 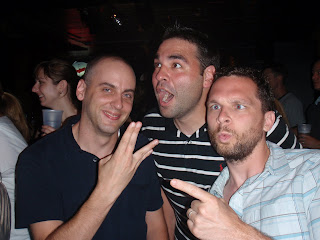 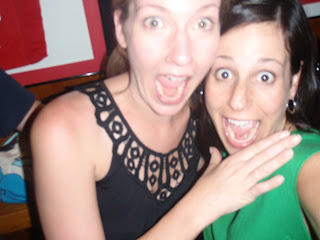 Bug started his first swim lessons this week, and although he's a bit young to follow really structured directions, we did blow bubbles today. Which is what I call a BIG STEP! And his favorite part of class is to hunt for "buried treasure," which are nickels in the zero-depth area. He's getting braver every time, and I'm so proud of my little fishy! 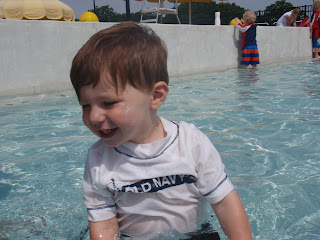 I've been working with my bro TriEric and his wife Aimee to try to really amp up the involvement in Evotri2: Tomorrow's Triathletes, Today. That's what I'm calling my Battle of the Schools. The weather hasn't been cooperating, as our first brick was thunderstormed out on Friday (BOOOOOOOOOO) but things look great weather-wise for the next week of workouts or so. We just need to keep those thunderstorms at the APPROPRIATE TIME, YOU HEAR ME MOTHER NATURE? Yeah, I said it.

Anyways, to see what is going on there, check out the blog I put together for the kids here. We've got over 30 kids expressing interest, but of course work and summer vacay always gets in the way. If we had 10 kids actually make it all the way to the starting line, I'd be really pumped! I am just excited to have another school on board this year, too. So as soon as I have some pictures to post, I will!

SUPER stoked for WIBA this weekend--old buddies, can't wait to see ya again! And can't wait to meet some new friends, too! I'm sure we'll have about a gazillionbilliontrillion pics to post next week. Giddyup!
Posted by Trisaratops at 8:23 PM 5 comments:

Email ThisBlogThis!Share to TwitterShare to FacebookShare to Pinterest
Labels: Battle of the Schools, WIBA 09

My life is measured in school years. And another one has just closed.

There's a certain familiarity to it; predictability and routine, but also never the same day twice. Never the same student twice. This, I think, is part of the reason I love what I do. Every year, I walk out of a clean classroom--all the posters taken down, the secret initials written in chalk on my board by kids who think I'll never find 'em, the scantrons in the recycle bin, and the students gone. Just me, and 31 empty desks.

I always get a teensy bit sad--actually, I don't think sad's the way to describe it...wistful, maybe?--when I walk out of that room the last time every June-whateverth, because I know I'm another year older. Another year has gone by, and I'm that much different than I was when I walked in there.

But there's something magical about an empty classroom. It just begs to be filled. And I know when I lock the door for the last time that I'll unlock it and enter in August even more older, and hopefully wiser. Under different circumstances. Still teaching about the Enlightenment and the Gilded Age and the Cold War, but hopefully not the same lessons. And definitely not to the same audience.

I've now been teaching almost one third of my entire life, which is hard to believe. Next weekend I'm heading down to Miami for my ten-year reunion. Where my school year ended, and I packed everything up, and I said goodbye to my good friends that last day after the caps and gowns were put away and the cheap beer had been tapped out, and drove away. And then--only then--I cried. I knew it was the end of something, and I just didn't know what was next. I was afraid that the quote "best four years of your life" end quote were over. What could be better than that?

The good news is what was next has been even more amazing than my four years there. I didn't know it then, but I can appreciate that now, as I'm knocking on the door to 32 years old and walking out of my tenth school year as a teacher.

Yesterday I ran a new loop, which is different for me. As stated before, I enjoy routine. I like the same patterns. I like to know where I am, at what time, and how that compares to last run. So for me to branch out and try a new loop was definitely different. And, here's the kicker--I didn't even take the Garmin. Type-A TST put it away and just ran for fun. Such will be my runs for a while here, as I am in definite need of a break. I have some pretty lofty goals in mind, but I need a bit of time here to recharge the batteries.

I'm reading Dara Torres' biography right now, which seriously is making me want to swim every. single. second. I can, because it reminds me of when I used to watch swimming as a kid. I LIVED for the Summer Olympics. I remember watching in on our TV in our old house--the '88 Olympics, on my parent's small TV in their bedroom. I grew up worshiping the likes of Dara Torres and Summer Sanders. I loved to swim, and am well aware that I never met my full potential in that sport. Just when I needed to step it up a notch and swim year-round--right around, oh, age 12-13 or so--along came band and cheerleading and softball and boys and all the other reasons why I didn't want to stare at a black line for hours on end. I don't really regret it, since I think about all the things I got to experience instead. But I've accepted that I never got to see how far I'd go in that sport. Conversely, I'm on an absolute thrill-ride seeing how far I've come in a sport I NEVER thought I'd enjoy--running. So it all evens out, I think, in the end.

I'm only halfway through, but I love DT even more now that I'm reading this book. I think I can really identify with her in a lot of ways. Not in the 24 second 50 meter way. (In my dreams....) But check this out....sound familiar?

"One thing I learned from being a pregnant athlete and then an athlete-mom is that when it comes to women, sports, and child-bearing, often people's first reaction is to say, "No you can't." You can't do those exercises. You can't go that fast. You can't win that race. But most of the time that negativity is not based on fact. It's based on ignorance or fear. So I chose to do my own research. I wanted to learn what my own body could take." --page 71

"...other people were constantly insinuating that age did matter, that even at 33 I was too old to compete. "Don't you feel terrible in the water?" people would ask. "You know, being so old and out of the water for so many years?" Questions like that really bothered me until I realized they had very little to do with me. Our whole culture is so terrified of growing older, so sure that life goes to hell progressively once you pass 25 or 30 or 35--whatever number people have stuck on their heads. But I came to see such negativity as a reflection of other people's fears about life, a window into the ways in which so many of us are limiting ourselves and selling ousrselves short. I decided, back then, not to live that way." --page 109

I know now that the best is yet to come. I've been so lucky and blessed so far, in racing but really just in life in general, and it's easy to get stuck in the routine and enter another age group and feel like, "That's it...the good times/races/days are over." But that, my friends, is total bull. One day, I'm going to qualify for the Boston Marathon. One day, I might even become the swimmer I could have been 20 years ago. Or one day, maybe I'll even hit a home run over the fence. (My one and only lonely home run on record was inside the park.) Who knows? I don't know what I'm doing next week...or certainly next school year.

But I know one thing for sure: I am not going to slow down.
Posted by Trisaratops at 8:06 PM 8 comments:

Extra protein with a side order of gills

The end of school is almost upon me, and I have about 3.7 nanoseconds to breathe and post, so I thought I'd update you on what I've been up to since kickin' it at the Cleveland Half Marathon three weeks ago!

It's midgie aka "Canadian Soldier" season here in the NEO.

They look like skeeters, but don't bite and don't live more than 24 hours. They are just here to swarm black clouds and become fishy food for Lake Erie. I hate to complain about 'em, because they are a sign of a healthy Lake Erie. However, they swarm in nasty black clouds and you can even HERE THE BUZZING in the evening of said clouds. If I hadn't lived hear Lake Erie most of my life, I'd be seriously freaked out. They're not quite as bad as this picture, but you get the point.. 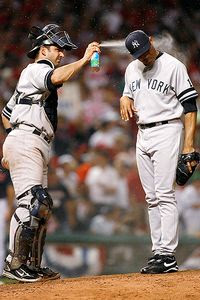 See, they are good for something! A-ha, Stupid Yankees. :)
So why, then, did I think it would be a good idea to do a ride on Route 2 during Midgie season?

Also, I decided to act like a triathlete and actually swim.

Do you know how many times I've been in the pool since IM New Orleans 70.3?

In honor of freshman final exams, I'll give you a multiple choice question:

A. ONCE.
B. FORTY-TWO THOUSAND FIVE HUNDRED AND SIXTY SEVEN.
C. NINETY TWO.
D. ALL OF THE ABOVE.

Yes, friends...it is sadly ONCE. So I knew I had it coming for me when I got in the 25 meter outdoor pool on Saturday. I was literally afraid to start swimming! My mush-tastic arms didn't know what was about to hit them.

I did 2000 meters (slowly and out of breath) and it took me just over 31 minuts to swim a mile, which normally is HORRID for me, but all things considered I was okay with that. Now that I have access to a pool from 6am until 9pm, there are NO EXCUSES for me not to hit it at least 3-4 times a week. Bring back my gills, please!

So if you want a non-traditional protein shake made with midgies, just let me know. Otherwise, I need to get ready to hang on those Wisconsin Hills at WIBA--giddyup!
Posted by Trisaratops at 8:45 AM 10 comments: