My interims are due on Monday which means, yikes, it's been about a month of school now and I've barely had time to workout post much.  Whew.  Here we are.

I'm hanging in there.

I've been playing a little game on the weekends called "Wriggidy Wreck YoSelf For One Hour" on the bike, which is a sort of sick rendition of "Hour of Power" that we used to play in college minus the red solo cups and plus a bike and a powertap.  Basically, I don't even remotely have time to do any more than a 60 minute ride (boo).  So, I make it count and try to beat my power average on an out-and-back that I have here.  So far, I've beaten it every time and have been kind of riding like a freaking maniac.  Good thing I have a race next week next month not for SEVEN months or so!

But at least I'm having some fun out there, right?

On a random note, since I don't have much time to workout at the moment, I am definitely dreaming big.  My secret plan was to throw my name in the lottery for the Escape from Alcatraz and use it as an excuse to a) have my butt handed to me big time and b) see Coach Emily.  But the America's Cup had to go and be in San Fran next year, so they moved the race up from June to--wait for it--MARCH 2.  You know, because it's always so BALMY AND WARM in MARCH in San Francisco.  Not to mention, impossible for me to get there on a weekend during the school year.

(Yes, I'm a little bitter about it.  Sorry if you sail and stuff....but you basically ruined my plans)

So, that's not going to work.  But it hasn't stopped me from thinking about next year.

Guess what I will NOT be doing?

Any kind of running race that's more than a 10K in the spring!  No, really! I'm serious!  It only took me two seasons of injuries to learn this lesson.

I plan on actually acting like a triathlete this off-season and swimming and biking lots and running not as much as I usually do.  Because the amount I usually do gets me HURT.  So perhaps I should try another route, no?

That being said, do you want to guess how many times I've made it to the pool since it closed on Labor Day?  Here's a hint: it's between -57 and 1.

But I firmly believe that everyone needs a good off-season, even if it is a few weeks.  You need to back away and think about other things, which for me means sleep and grading.  No, I kid--I have been doing some other things and it's been pretty good for me.  I've been able to take the kids to the apple orchard, do my Hour of Power rides, try some new strength stuff that I usually blow off, run with no agenda with a few friends, and I even tried stand-up paddleboarding.  One perk of having Lake Erie at the end of my street.  It was super fun and if I had a spare $1,000 I'd buy a board tomorrow morning.  Maybe someday....!

A good off-season leaves you ready to start.  Hungry to start.  I'm not there yet, but I can sense that I'm getting there.

I'll be hitting the ground in June ready to tri this year.  And I plan on doing the Rev3 Cedar Point race and having the half marathon I meant to have last May there in August.

And you know what?

I'm almost--almost--ready to think about trying that full distance at Cedar Point.  The thought stopped repulsing me and started somewhat interesting me.  It's on the radar.  Not anytime soon, so don't get too excited.  But I'm thinking about thinking about it.  It's the only way I'd ever do a full again--there are no more WTC races in my future since planning a year ahead is not possible for me.  Plus, having the course less than an hour away and so family-friendly would work.

SOMEDAY.  Not now.  So don't you dare start trying to talk me into it!

Let's say it's on the three-year plan for now.

Here's to dreaming big, sleeping in, and enjoying a short little off-season!

This weekend, about 894,670,201 of my friends were racing in various places, including the River Run, Ironman Wisconsin, and the Rev3 Half and Full at Cedar Point.

I, on the other hand, did not.

This made me quite sad.  But it was (partly) by choice, as the achilles issue made it really difficult to be able to race my way (hard) in Sandusky.  So I put the money somewhere else.  (Like preschool tuition...ack)

I really wanted to at least get to Sandusky, especially when I found out that my teammate Chris was going to jump in and race it two--TWO!--weeks after his last Iron-distance race in Grand Rapids.  Dude's a machine.

I really tried everything I could.  I wiggled things around.  I tried staying up later to get things done.

In the end, I was defeated.  It looked something like this: 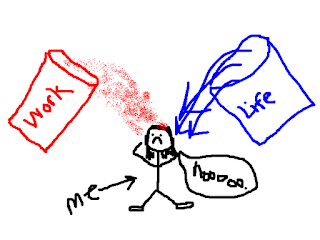 Instead of the 5-6 hours I hoped to have to go down and back to Cedar Point and cheer on my friends for a bit, I had about 1 hour.  Maybe less.  So I did what I always do this weekend.

I usually put on my IMW kit that I treated myself to after the race and go for a ride (if I'm not racing) this weekend, on my Iron-iversary.

This weekend, I was so exhausted.  Mentally, physically, the whole nine yards.  This year is looking to be challenging and unconventional, to say the least.  After spending almost 5 hours grading Saturday and still not being even close to done, I was done.  I had to walk away.  Because after 5 hours of grading?  Not much sounds good.  So I had to save it for Sunday.

And on Sunday I had a small window to sneak out for a quick ride.  So I figured I'd better make it count.

Every year I remember the race, and how damn cold it was, and how long I was out on that bike course.  If I remember correctly, it was something completely ridiculous like 8 hours and 13 minutes.  Not what I planned for then, and DEFINITELY not what I'd ever plan for now.  But, that was my year, and that's what I got and what I could do with the Iron-hand I was dealt.  But each year I get a little twinge of wonder.  What could I do now?  Now that I'm six years removed and six years better?

(I know I'm still a ways away from finding out, but each year the little wonder voice gets louder.)

I hammered on my bike for all my buddies out there on the courses.  I remembered how hard that ride seemed as I led up to it, and how many, many times that cold and rainy day, I wondered if I'd make it back to the Monona Terrace in time.  How that day, as I spent longer than a workday sitting on that freaking saddle, I felt every emotion, from chilling fear (literally and figuratively!), nausea, and anxiety to elation and joy.  Most of all, I just remember how happy I was to be off that freaking bike.

I rode as hard and as fast as I could, and had the ride of my season yesterday.  The fastest ride with the best power I've put out all year.  Yesterday.  Not in a race.

And I came back feeling better.  Still not where I wanted to be since I was hoping to be crossing a finish line yesterday, but better.  Enough that I'm ready to do it next year.  And that I will get through this year somehow, too.

Because if there's one thing that ridiculously slow, freezing cold, embarrassingly long ride taught me?

It's that I'm tough as fricken nails.

I'm going to have to remember that here when the fear creeps in and the doubt comes crashing over me and I wonder how on earth I'm going to make everything happen that needs to happen this year.

That's what I learned that day.  You just have to keep moving forward, that's all.

Congratulations to Sweet and all the finishers yesterday, and a huge, big, bear hug and nice cold one to my friend DaisyDuc, who was the overall amateur female winner at Rev3 in the full distance yesterday.   I really, really wish I could have been there to see it all myself, but I promise you--I was there in spirit.


Posted by Trisaratops at 4:30 PM No comments:

So tonight, I passed along the torch of my bright yellow BOB stroller to my friend's little sister.  I say little sister like I'm 12 and she's 10 still.  But, nonetheless, she's a super awesome runner Crossfit chick and, like me, cannot WAIT to start running again. She asked me for some advice on jogging strollers and I told her I'm about ready to put mine up on Craigslist and would she like a look? and she was all YES YES I WILL TAKE IT YES CAN I RUN YET?

So today we made the transfer.

She was in town for her shower in an adorable striped dress and with a big glowing smile on her face.  And my two kids were covered in cheerios and black raspberry ice cream and sweat, barefoot in the grass and running all over showing off for her.

You guys, the day I found out I was pregnant--seriously, that DAY--I started researching these strollers.  Not cribs.  Or carseats.

And as both my kids tried to tell me that I needed to keep it today (love it--no one will sit in it for over a year until today) and part of me wanted to keep it, I was reminded we have a good second-hand double that Bean and her Woody doll from Toy Story ride in sometimes, and that if I have to run with 80 pounds of kid while negotiating, I'd rather just wait until Matt gets home or get up earlier.  But I'll never forget this: 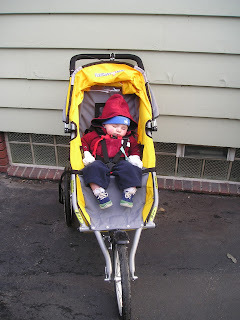 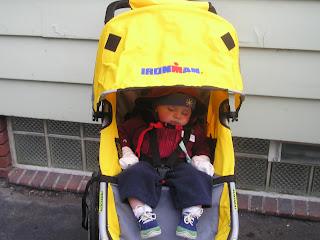 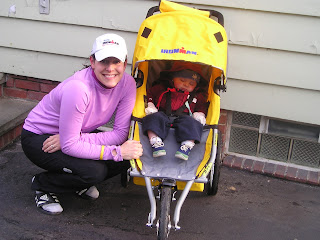 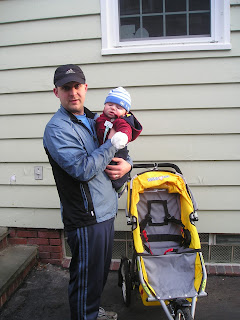 April, 2010.  One of my first runs on the circle path up near the lake.  Little Bean just woke up. 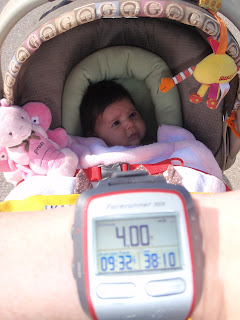 Summer, 2010.  The last time I could get him to actually sit in it for more than 30 seconds.  All tuckered out after 3 miles (I didn't want to push my luck) 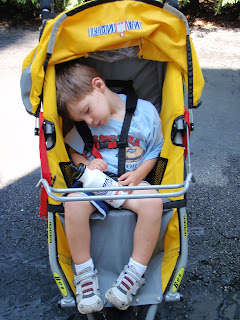 And when he woke up 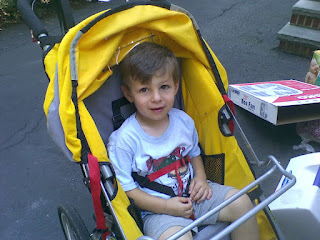 So as I watched them eating dinner and told Matt how I was a little sad, because it was the first thing, the VERY first thing I bought, and then I got all teary and choked up.  And at that very moment, Bug said, "Mama, maybe next year I can get a wristband so I can swim in the deep! Like you!" and then I realized that it's going to be just fine, even if I'm not pushing my trusty yellow BOB anymore.

And that's the funny thing about this whole parenting ride I'm on.  Just when I think it can't get better and I think about how amazing it was back then, I'm reminded of how it does, indeed, keep getting better and better and even more amazing somehow. 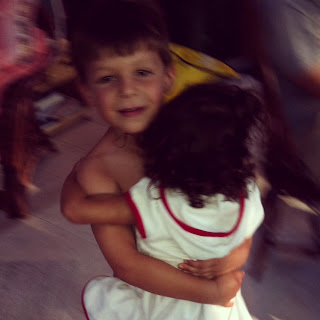 Posted by Trisaratops at 9:12 PM 2 comments: