Which is good, because I have a lot to say. (Shocking)

First of all, I'd like to review the FitBit Flex, which I was given as a Women's Health Action Hero (yippee!) and I was very curious to try out!  See, I'm a *little* bit competitive (cough cough) especially against myself.  So, I was interested to see if this would change my habits, enhance my habits, or not really change much at all

The FitBit Flex is available at Target here, and has the following information:

The FitBit Flex is a slim, stylish device that is with you all the time. During the day, it tracks steps, distance, and calories burned. At night, it tracks your sleep cycle and wakes you silently in the morning. Just check out the lights to see how you stack up against your personal goal. It’s the motivation you need to get out and be more active.

Mine arrived and I tore up the box like it was Christmas morning.  I was excited to get it set up!

Good news is that for cavemen like me who are technically challenged, it was super easy to set up.  A few clicks and I was all good to go.  I also have it synced up to MyFitnessPal, although my old skool iPhone Model Negative Two doesn't automatically connect to the app.  But I hear iPhone 5 will, which is a nice feature.

It's lightweight, can be worn in the shower, and is very easy to read.  I just tap twice to see how many lights are blinking.  Once I hit five, it vibrates and does a little laser light show for me.  High five, FitBit.  You're cute.  Since I am a morning workout person, my little game became "How Early Can I Hit My 5 Lights?" Personal best: 10:32am.  I had ran and rode that morning.  I can't wear it when swimming, so all last week at Stanford pool I was a little disappointed that I couldn't count my yardage, but so goes life.  I got over it.

The other thing I like is that it tracks your sleep. Now, there's a little bad on this and it's because I'm a side sleeper who puts an arm under a pillow...so I could sort of feel it on my left side and it was a teensy bit annoying.  Not a deal-breaker, but still.  You get these cool graphics on your dashboard that tell you some information about your sleep patterns:

Question: what on earth am I doing from 2-4 am?  A kick line?  Pushups?  The Macarena? It was really interesting to see how restless I was then.  I could use this to try and figure out how to change my sleep habits a bit...maybe a little less screen time before bed? (Not that I violate that cardinal rule.  NO, SURELY NOT ME) Or coming off jet-lag from my week-long trip to CA last week?  It's a good metric to use and I've never been a very good sleeper, so I was most curious to see how this worked.

You also get stuff like this on your dashboard:  how many steps you've taken, miles you've moved, and your "Very Active Minutes" (which, of course, I try to best myself every day) 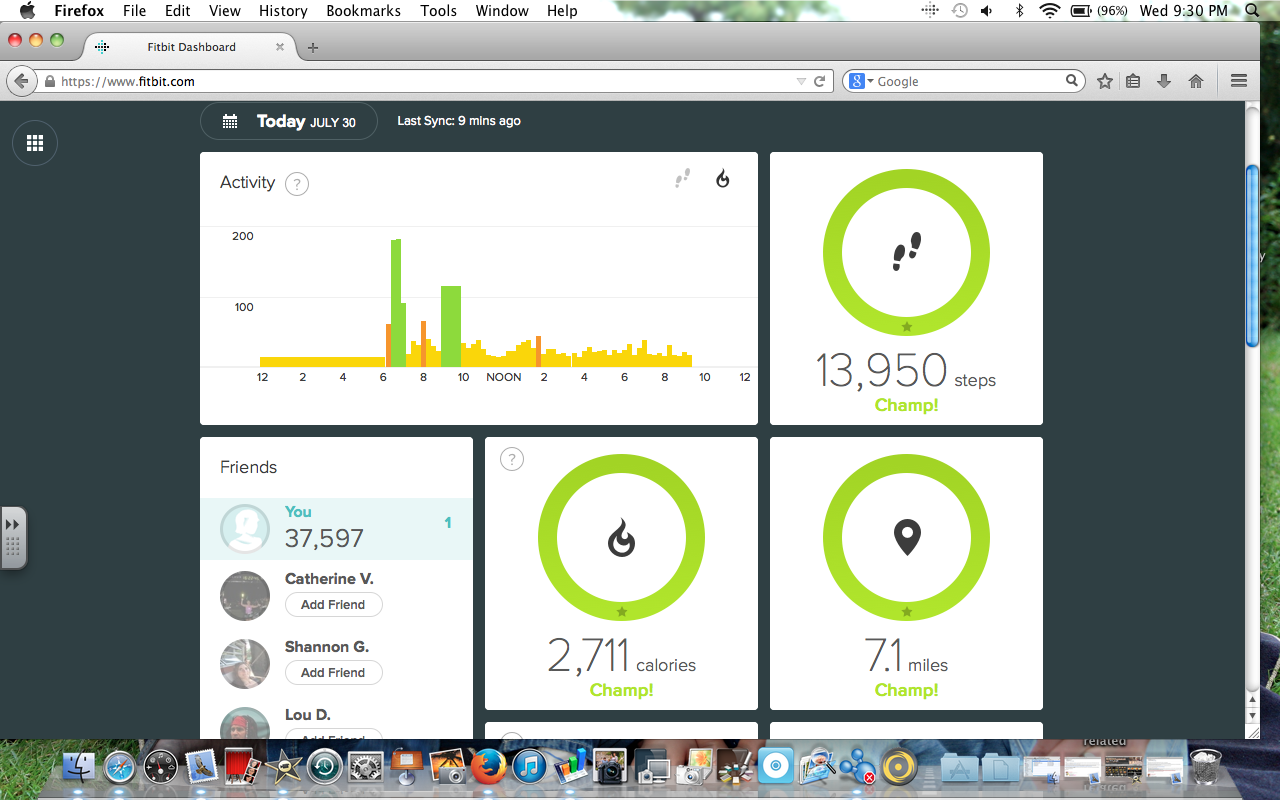 On the left, you can see the "social" aspect of it which I haven't played around with much.  You can link up with your friends to get a little friendly competition going.  That could also be a great motivator!

I mentioned the no swimming thing.  Sad face. I swim a lot.

I also mentioned the slightly-annoying-sleeping-on-my-side thing.

The only other thing I'd like to see would be another option for the arm band.  The violet is super cute, don't get me wrong, but usually at work I like to just wear simple gold or silver.  If I had a spare $195 laying around (unlikely to EVER happen), I'd definitely order this Tory Burch FitBit bracelet.  I LOVE THIS IDEA. Can someone make a "public-schoolteacher-budget one" for me?  Target, I'm looking at you!

Did I move more? Honestly, yesterday was a rest day for me after a triathlon Sunday, and I know on rest days I'm supposed to legitimately rest...but I wanted to hit my goal, so I ran around and played some frisbee with my kids in the park and a little pickup soccer.  It really did get me to move more.  On days when I am moving a ton (which is really most days), it's nice to see the metrics and especially the sleep.  Better sleep is a big goal of mine so I know that metric will be really helpful.

I think this is an EXCELLENT tool for beginner athletes and seasoned athletes alike.  Check it out at Target and if you have any questions, ask away!

Well, I've been gone for quite a while.

I haven't really known what to say.  Things have been a bit of a blur since late-April, and then they got better, and then they got worse, and then they were over. And we're still adjusting.  We'll never truly adjust, as anyone who has lost a parent knows.  I don't know; I haven't lost a parent. But Matt has, and Linda was a wonderful wife of 40 years as of May 11, grandmother to 6 (about to be 7), mother to three amazing children, and mother-in-law to me.  After almost five years, Linda lost her battle to cancer on July 9.

From what I'm gathering, losing a parent leaves a hole in your heart that is so painful and never, ever able to be replaced.  You never will get over this.  You never will move on; you will simply try to adjust and wake up and know the sun will rise again.  Just without her. And it will just come in waves, at the strangest times, and you'll feel that choking feeling in your throat and your eyes well up, but you just have to keep going somehow. 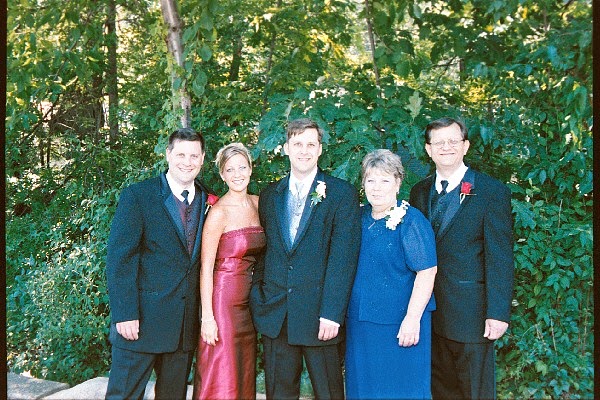 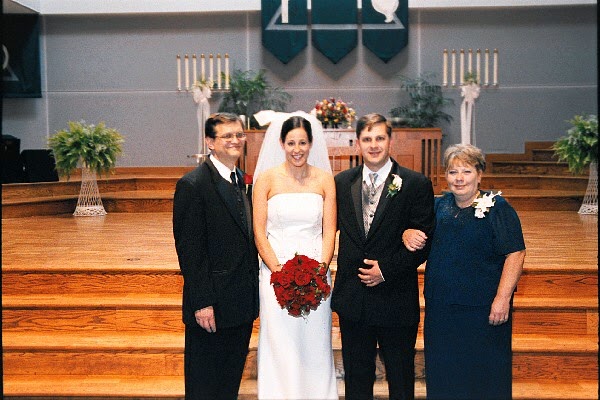 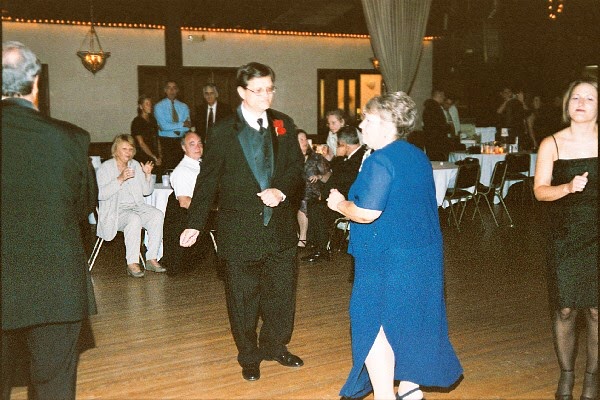 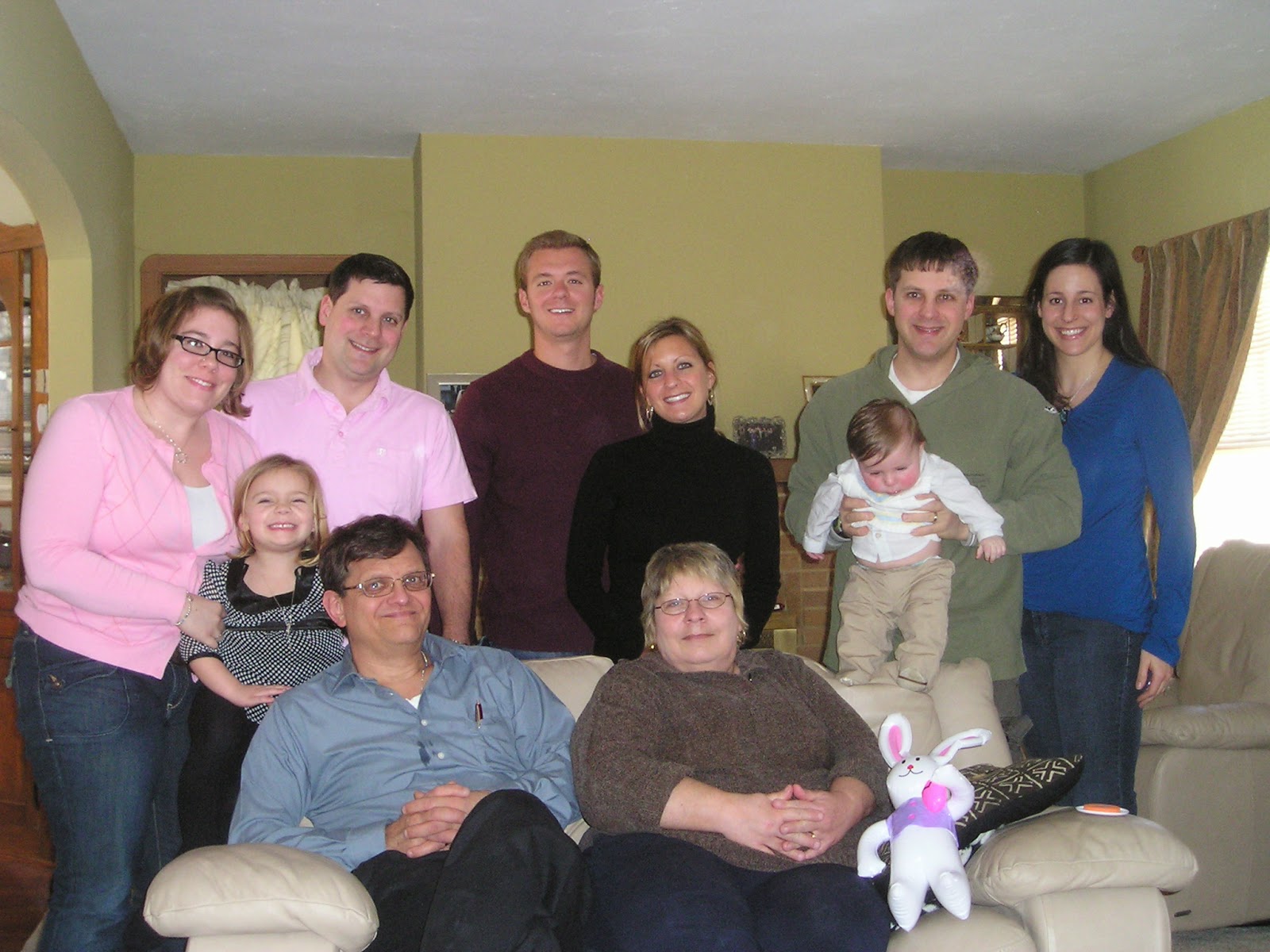 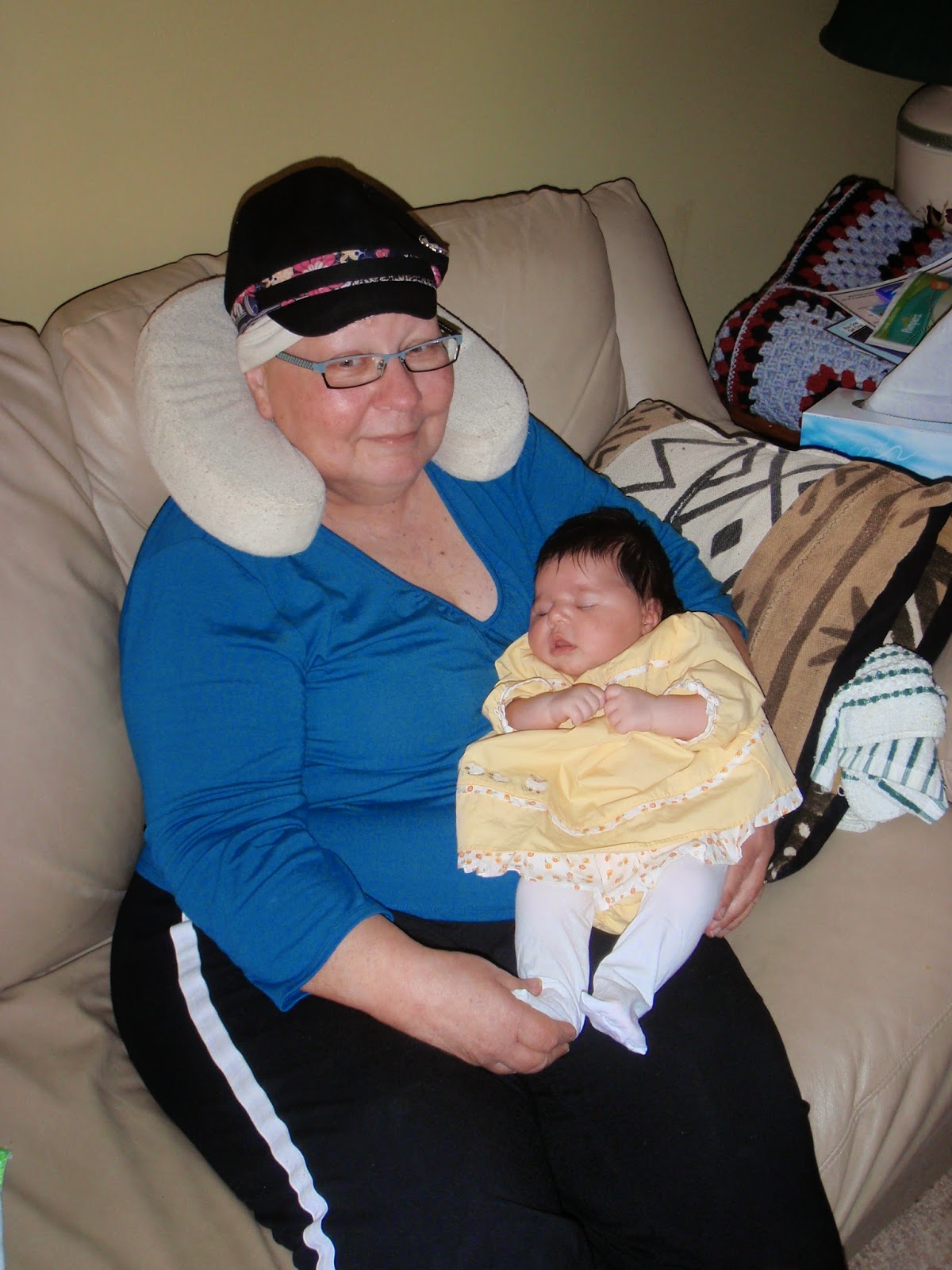 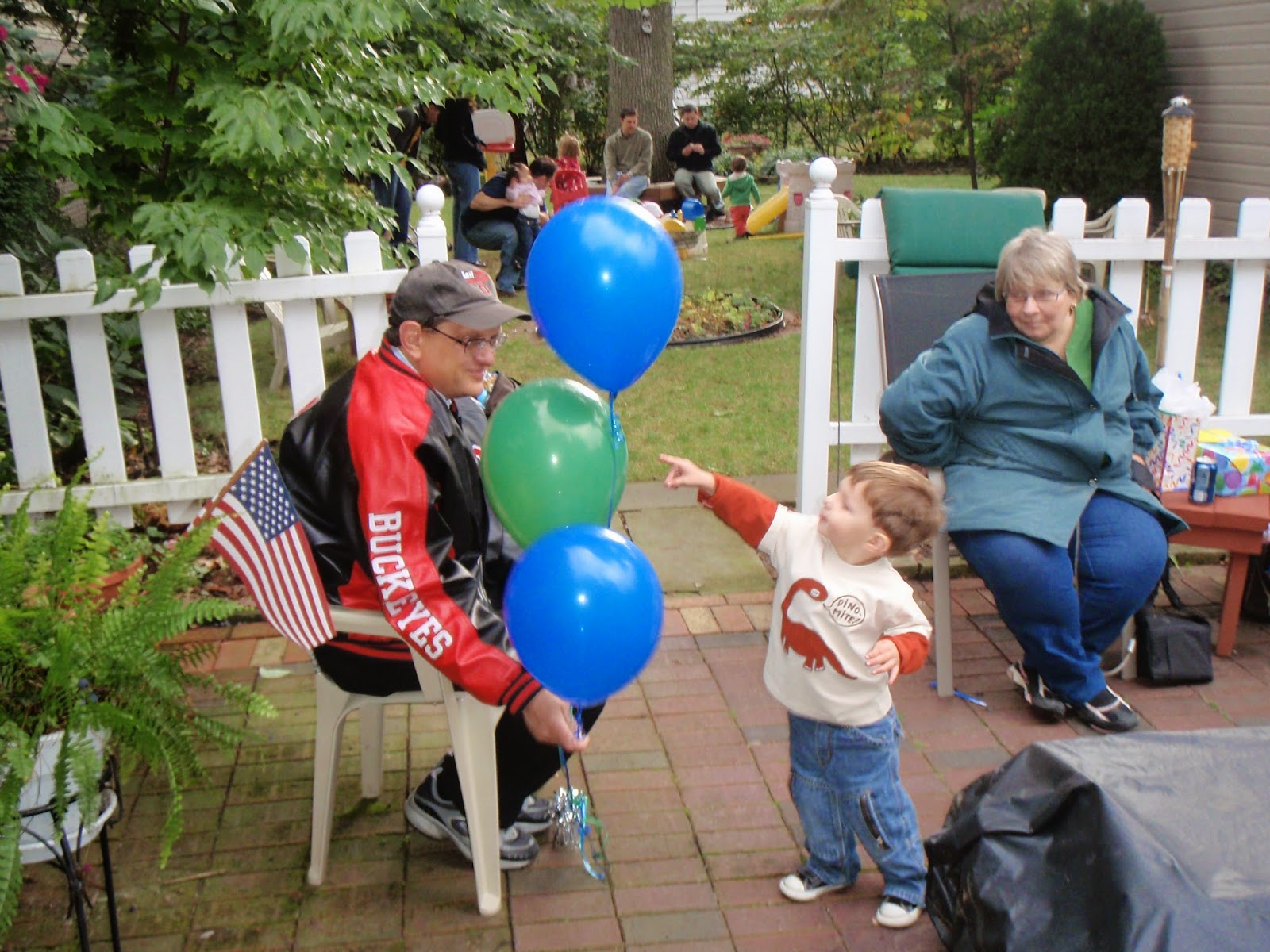 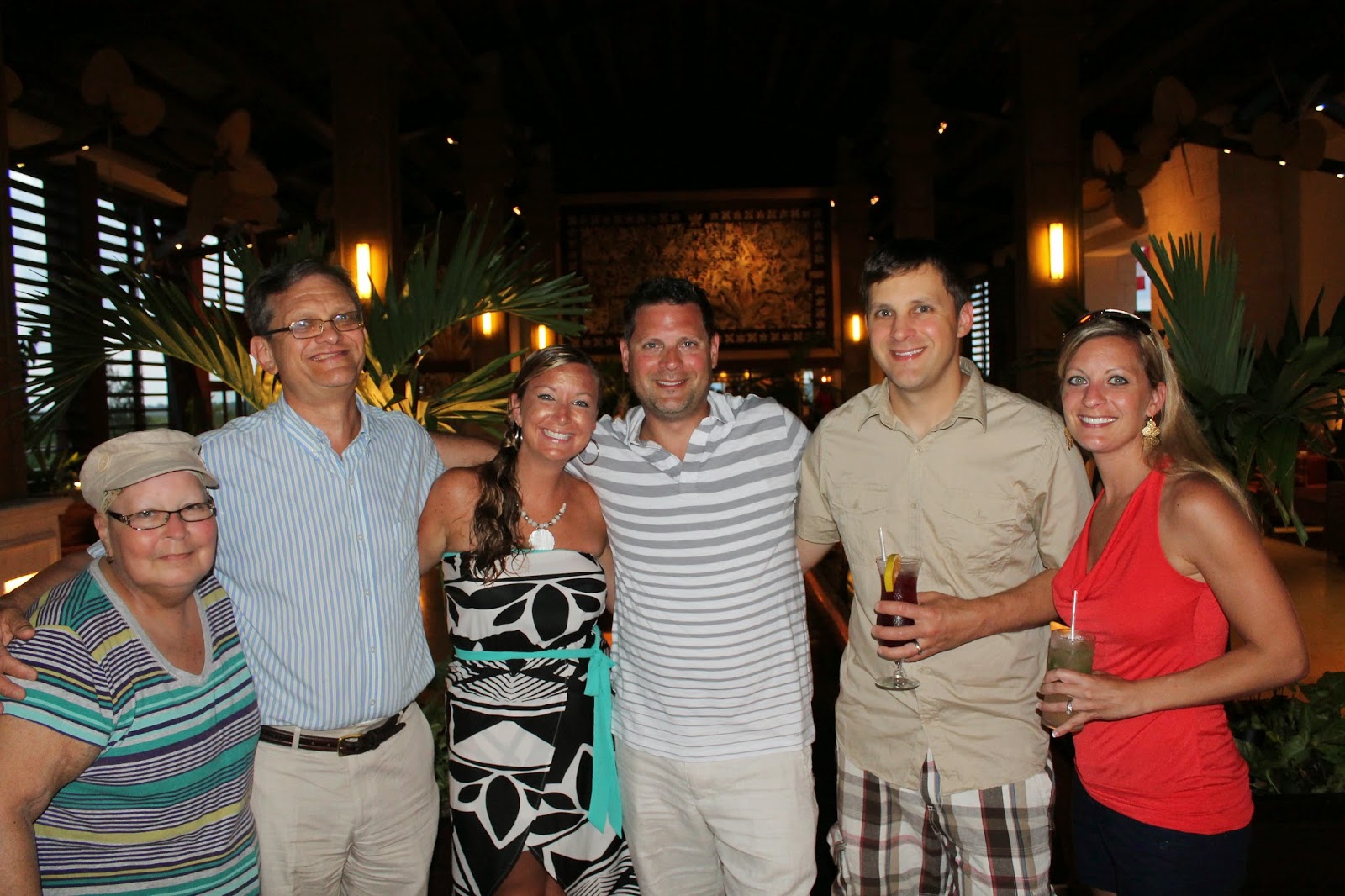 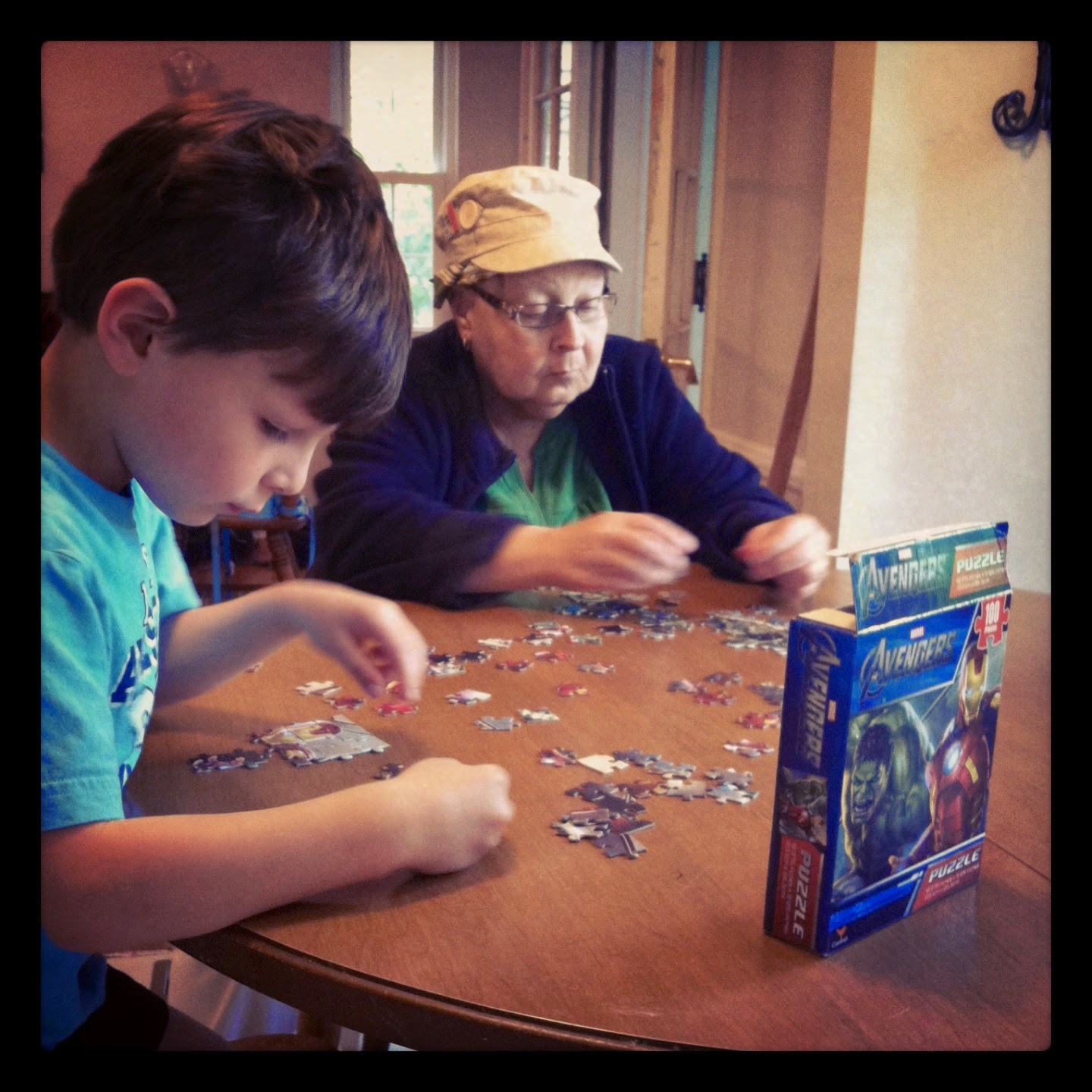 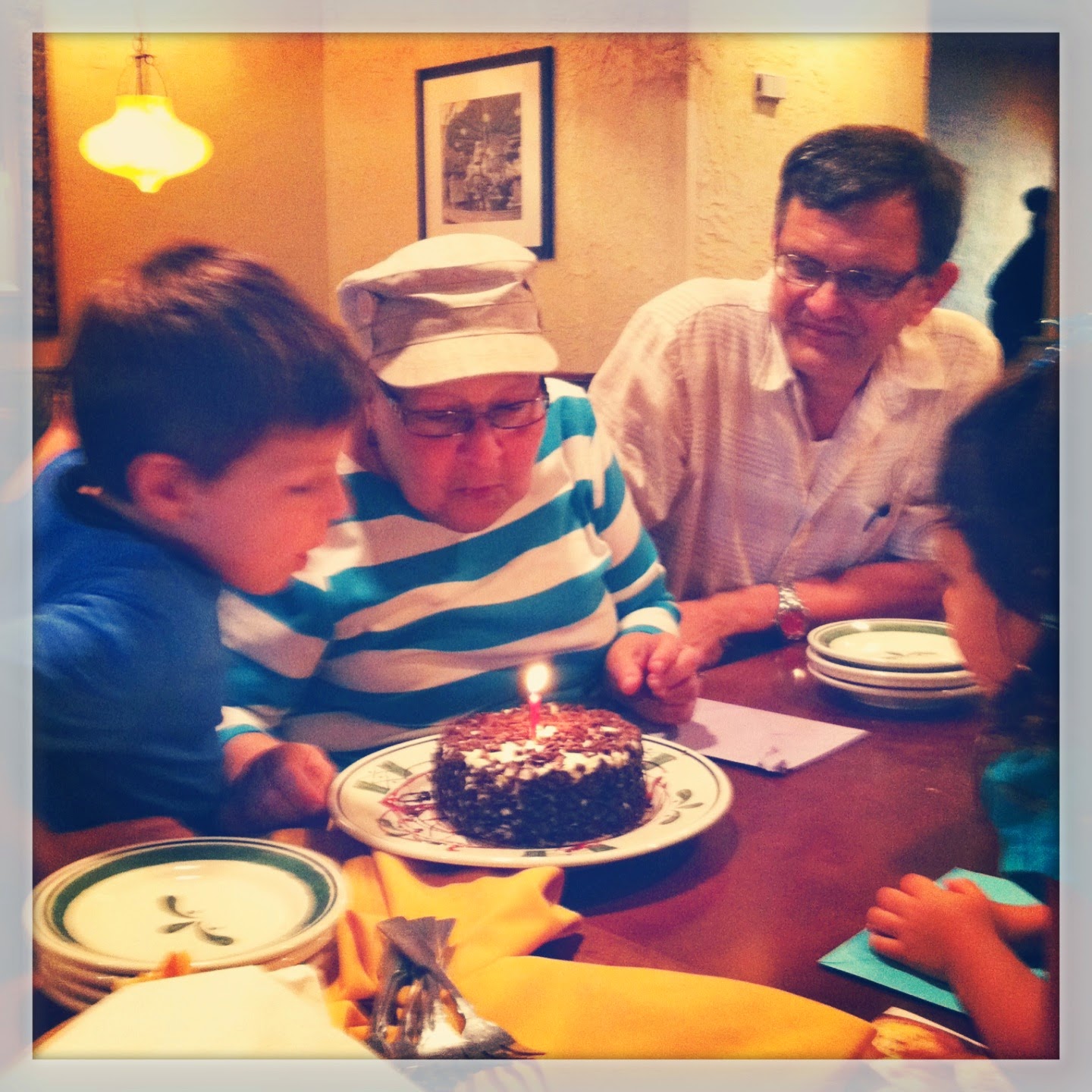 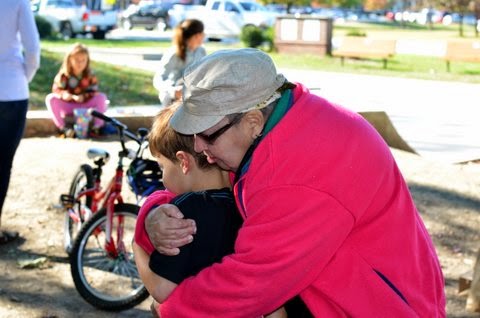 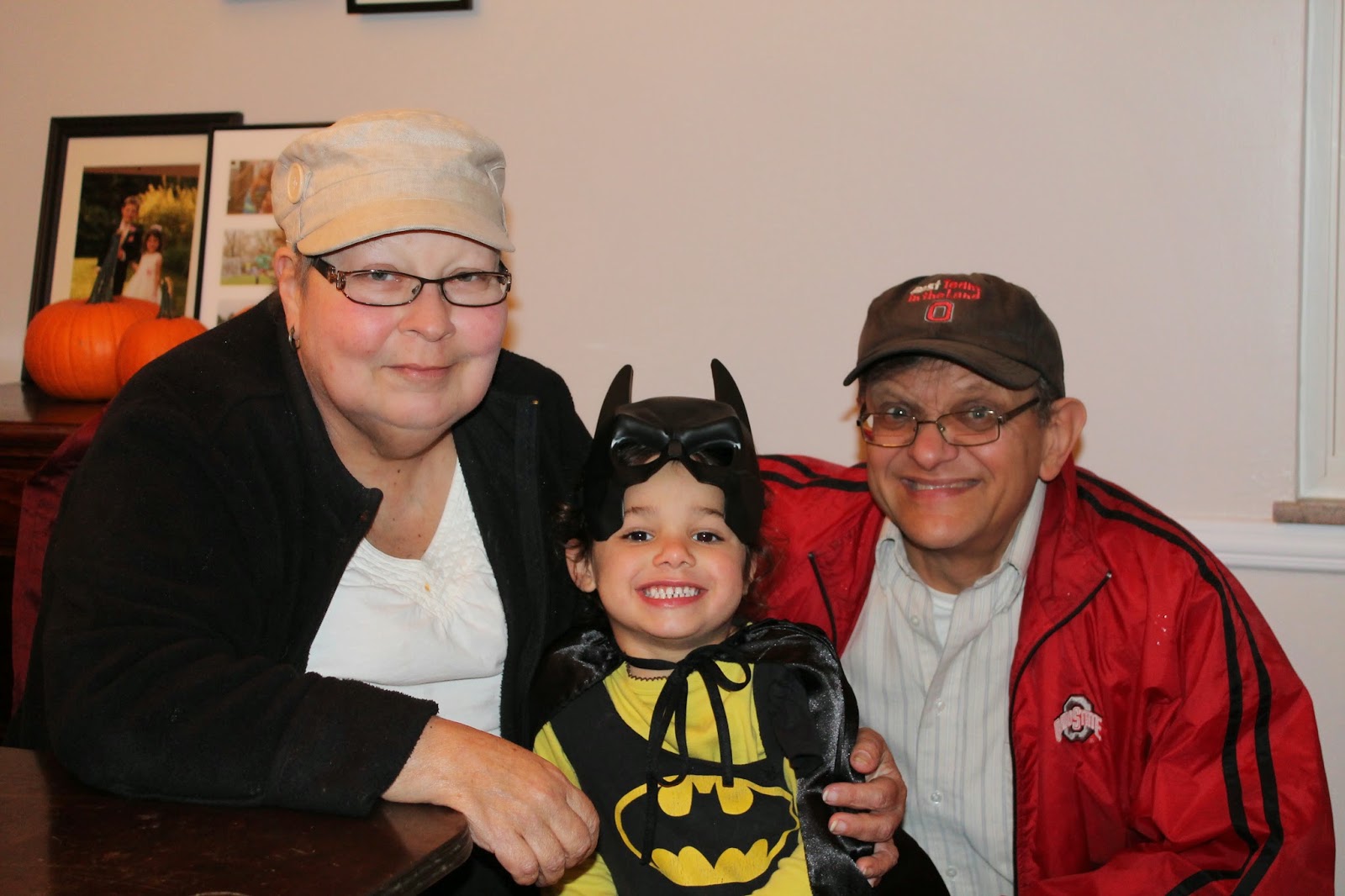 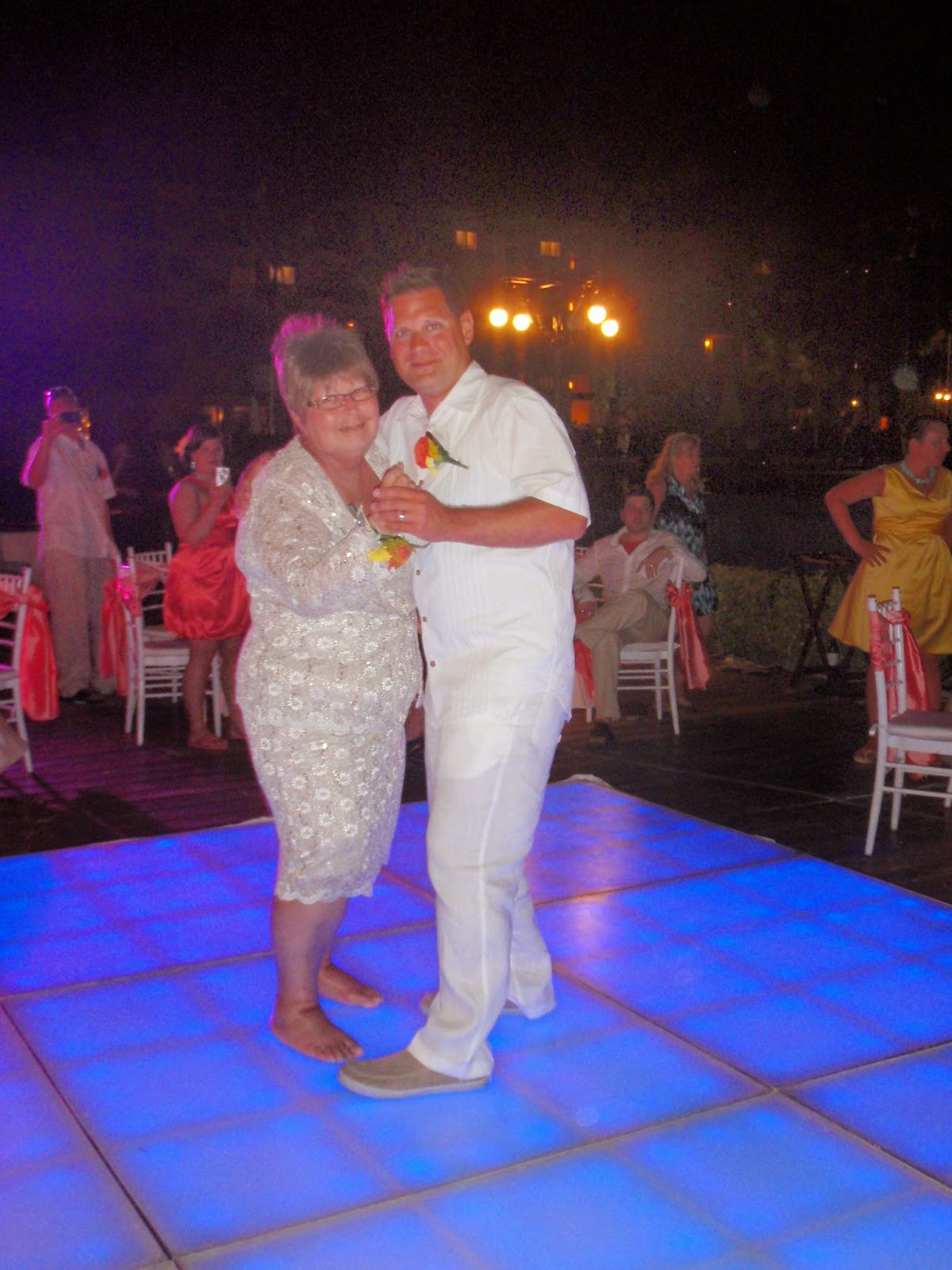 I was pregnant with Emery when Linda was rushed to the hospital on our anniversary: August 7, 2009.  The diagnosis? Stage 4 uterine cancer.  They did everything they could; they took out everything they could.  But it was everywhere.  There was only so much they could do.  Everything I read said "12-36 months." We were devastated.

She took every single medicine they threw at her. No matter what it did to her poor body. She didn't care.  She didn't complain.  The only thing, and I mean the ONLY thing, she ever said in five years of chemotherapy, medicines, ports, and other assorted horribleness?

That's all she ever said.

She wore her wig just once; for Dan's wedding a year ago yesterday in Mexico.  And after that picture was snapped, she put her hat back on.

We decided to bury her in her hat.  She always looked so cute in her hats.

She beat every single statistic and odd out there.  The doctors and nurses were amazed.  She fought so bravely and so hard.

Not too many people can say they met their mother-in-law when they were 6, but that’s how it went for me.  My earliest memory of Linda was in first grade, when she was the room mother for my now brother-in-law, Dan, who was in my class.  Little tiny Kim was always on her hip.

Linda was the kind of person who was absolutely selfless.  She cared first about others, all the time.  She had a dry and witty sense of humor, too.  We’d just crack up all the time.  She was always throwing in one-liners and zingers that were hilarious.  She loved Elvis. She hated squirrels and would throw potatoes at them when they tried to bust through her kitchen window screen.  She was an amazing cook.  She loved her family more than anything in the entire universe. She could remember any single historical event, what she was wearing, and what song was on the radio when it happened.

I keep remembering random things at random times, but usually when I’m running and biking and swimming.  Because it’s alone time, and it’s when I think.

I remember how she whispered in my ear at my wedding, “I’ve been waiting for this since Homecoming!” when Matt took me to Homecoming Dance in 1993.

I remember how good her stuffing is at Thanksgiving.  Oh my gosh, it’s amazing.  I didn’t get the recipe from her.  I should have.  She never wrote any recipes down; she just did everything by scratch and memory.  And then I feel the welt in my throat again.

I remember how her body was wrecked from fighting the initial chemo battle but she simply did not care: no matter what, she was going to stay up all night to see her new granddaughter born at 4:15am on February 21, 2010.  Nothing would stop her from being there.

And I remember that Matt and I are going to need to work hard to keep her memory alive for our children.  Jackson is 6 1/2.  Emery is 4.  If we don’t work at it, their memories will fade.  And that crushes me.

Most notably, I remember her courage, grace, and strength, as I dropped off meals to her weekly and as we all rallied around her.  She was the matriarch of the family; she will be missed more than I can explain in words.  And my heart aches for my husband as he tries to move forward into this unknown with a piece of his heart, forever gone.  The lessons she showed us in her short 63 years were nothing short of amazing.

You want endurance?  You think Ironman is tough?

I am here to tell you that it is nothing.  Linda was tougher, more persistent, more inspirational, and more courageous than any athlete I’ve ever known in my life, and her battle was longer and more difficult than any race you can imagine.

My training and racing lately has been a time for me to find peace, and think about what it is in my life.  As I stood on the beach on Sunday for my first triathlon of the season, and first race since Linda left us, I prayed, “God, let me enjoy this race and any pain I feel and just remember to feel alive and well and grateful.”

That’s really, to me, what racing and training is.  A reminder that life is a gift, pain is a lesson, true courage is in grace, and strength comes from within.

That is what Linda taught me.  That is how I will try to move forward.
Posted by Trisaratops at 9:04 PM 3 comments: